Robin Windsor is a British Professional Latin and Ballroom Dancer, best known for his appearances in the BBC television series Strictly Come Dancing.
Robins impressive career was initiated by his parents when, at the age of three, they enrolled him in a local dance school in Ipswich. From the very beginning Robin studied both Ballroom and Latin dance, eventually this led to him competing in those disciplines at the highest possible levels. His skills led him to represent England amassing numerous championships, both on the domestic and international levels.

In 2001 Robin was cast in the groundbreaking and critically acclaimed dance show ‘Burn The Floor’ which he was to tour the world with for the next 10 years, culminating in a 9 month run on Broadway, during his time on in the show Robin was cast as a lead dancer.

Robin is arguably one of the most recognisable faces on Strictly Come Dancing, during his time on the show he partnered Anita Dobson, Patsy Kensit, Lisa Riley and Deborah Meaden. On Strictly he danced alongside stars such as Neil Diamond, Rod Stewart, and Alice Cooper, Katherine Jenkins to name just a few.
Robins first appearance on Strictly was in 2010 joining as one of the three new male professional dancers alongside Artem Chigvintsev and Jared Murillo. For his first year Robin was partnered with actress Patsy Kensit, reaching week nine in the competition.
In 2011 Robin enjoyed his second year of Strictly Come Dancing this time paired  with EastEnders legend Anita Dobson, also reaching  week nine in the competition.
Robin also competed in 2011’s Children in Need Special with BBC Breakfast presenter Susanna Reid and successfully won the competition, lifting the coveted Giltterball trophy!
At the beginning of 2012 Robin completed his second Strictly Live Tour before hitting the road for Dance To The Music with the Strictly band, Kristina Rihanoff, Artem Chigvintsev and Kara Tointon. Robin had massive success in the 2012 series of Strictly Come  Dancing with actress Lisa Riley. The pair became the people’s champions reaching the semi final stage, they then took part in the Strictly Come Dancing Live Tour in 2013.
2013 saw Robin return to Burn The Floor this time headlining the show on the West End,  which was a childhood dream completed.

Later that year, Robin was delighted to be paired on Strictly with Deborah Meaden from the hugely successful Dragons Den. The pair had the surprise exit of the competition in Week 5, but they went on to compete in the Strictly Come Dancing live tour.
That December Robin took to the Strictly ballroom once again to participate in the Christmas Special. His partner on this occasion was Radio 1 DJ Sara Cox, who performed a beautiful waltz.

Robin kicked off 2015 with a bang in The People’s Strictly for Comic Relief, partnering Anna Kennedy OBE. The pair were a smash hit with both audiences and the judges, who gave their Charleston a perfect 40!
Summer 2015 saw Robin starring in a year long National UK Tour  of Puttin’ On The Ritz.
Robin was a regular reporter on It Takes Two, and lit up our screens in 2015’s Strictly Come Dancing Christmas Special with the wonderful Alison Hammond.

2016 saw Robin embark on a National Tour of his own creation, with the Keep Dancing UK Tour.

Robin holds talks on how people can empower themselves through dance, with body confidence, living in the moment through mindfulness, which he believes can be achieved by letting go through movement.
Robin is aiming to work with Mental Health Charities to help people improve how they view and feel about themselves, using the positivity of dance.
Robin says ‘ Dance can be an amazing tool, it releases endorphins and can help people forget their problems even if it’s just for a short time, it can build a confidence people thought they never had, it’s great to see the change in people afterwards’
Robin works annually, out in Saint Lucia with the The Body Holiday teaching different dance styles. The Body Holiday is a luxury resort situated in Saint Lucia, it promotes a getaway for body and mind. Recognised as one of the finest destination resorts and centre of well-being, activity led by their clients.

In 2017 Robin was awarded a Honorary Degree from Suffolk University, he also embarked on a National UK Tour with Dance To The Music with Kristina Rihanoff

This year saw Robin after 20 years of his career being on Tour and on our Television screens, putting on a National Farewell Tour, which ended November 2018.

Robin will be appearing in Aladdin as the Genie for Panto Season, in Redditch from December 2018 through to Early January 2019.

Robin is back in the UK following a short time at The Body Holiday in St Lucia.

This Panto season Robin will be appearing as the Lead in Aladdin at The St Helens Theatre from December through to early January 2020.

Following Robins own person struggles with his Mental Health, he has started Motivational speaking and a New Corporate Team Building course, head over to the Contact section of the website to book Robin or find out more! 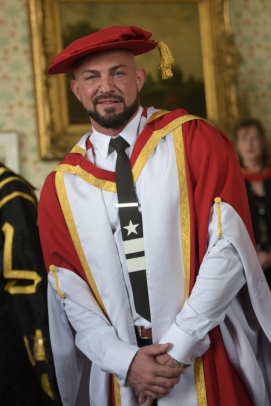 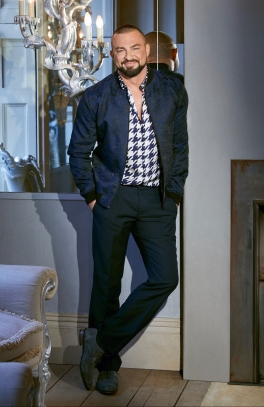 Drinkies for Tristan’s 40th @tristanjbeech @beechjen1 😘😘 @pergolacanarywharf - love you guys 🥰
Another day, another rehearsal, another sweat 💦 @roseinthewild1 ❤️ I’m actually smiling in a pic for once lol
@rebeccalisewski you were FABULOUS tonight @crazycoqs. Soo good to see you do your thing and so brilliantly ❤️
@burnthefloorofficial rehearsals maybe 6 weeks away but the prep starts now! The show is so physically demanding and with @anyagarnis just having a baby and me being an old man lol we want to get ourselves in peak condition for the show. It’s been a good decade since either of us did the show. A couple of hours of Ding Dong Daddy was enough for now to get the blood pumping around the body 💦
❤️ @robbiekmetoni @ashleighhunter83 @rememberingtour what an amazing show - so proud of my gorgeous friends x
@gordanagw is in London, yayyyyy ❤️
My Tweets